HomeLATEST NEWSIn the summer of 2022, Facebook Smartwatch may release...

In the summer of 2022, Facebook Smartwatch may release with dual cameras.

Facebook intends to develop a new smartwatch (Facebook Smartwatch) with twin cameras in order to eventually dethrone Apple as the market leader in the wearable area. According to people close to the project, the social media behemoth plans to showcase the device next summer. Facebook also intends to make the device self-contained, so that users may use it without having to rely on their smartphones.

The report comes , which recently engaged with people working on the project. According to the storey, the Facebook smartwatch would have two cameras and a display module that can detach from the band to allow users to record photographs and movies while on the road.

At the front, there will be a camera sensor that will mostly be utilized for video calls. The primary camera with auto-focus functionality will be located at the back of the module, allowing users to record high-resolution images and videos without the use of their smartphones.

Furthermore, according to the article, Facebook is encouraging third-party manufacturers to create accessories for the device that will allow users to attach it to their garments or backpacks.

According to reports, the social media behemoth is collaborating with some of the leading wireless carriers in the United States to allow LTE functionality for its future smartwatch. Users will be able to use the Facebook smartwatch without having to sync it with their smartphones in this manner.

As previously said, with the debut of the next wristwatch, Facebook intends to compete with Apple in terms of wristwatch sales. However, the company initially hopes to sell volume in the low six figures, which is a minuscule portion when compared to Apple’s market share in the mentioned area.

The device will be released by Facebook sometime in the summer of 2022, and it will be available in three colors: black, gold, and white. This is consistent with prior claims that Facebook plans to release a Facebook Smartwatch next summer.

Although previous sources stated that it would be a fitness-focused watch, I doubt they will be able to integrate a large number of sensors as well as a dual-camera array on such a small device as a smartwatch. However, as we approach the device’s likely launch next year, we will learn more about it. So keep an eye out for more developments on this story.

According to a recent story by The Information, Facebook is planning to incorporate apps from fitness and wellness companies such as Peloton. Although the wristwatch is expected to launch with Google’s Android operating system, a new report suggests that Facebook may develop its own operating system for the future wearable.

According to the report, Facebook has taken moves to ‘consolidate’ its numerous programs, including long-standing ambitions to integrate its apps’ ‘messaging back-ends.’ As previously stated, the wristwatch is planned to be tightly integrated with Facebook-owned apps such as Messenger, WhatsApp, and Instagram. The cellular connection will allow you quick access to SMS and phone calls.

According to the article, Facebook will also allow the wearable to interact with Peloton Interactive’s gear and services. While the impending wristwatch appears to be a profitable move, Facebook’s poor history in handling user data will undoubtedly raise concerns, especially because the business will have access to fitness and health data. 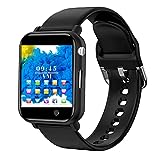 EXZZER Smart Watch with Camera and Sim Card...
SaleBestseller No. 3 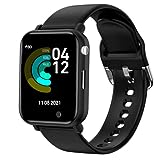